We went to a Latke pre-Chanukah party with a Pirate/Princess theme this weekend. Tovina was given a choice between ballerina or pirate gear. It was an agonizing decision where she really wanted both until finally settling on the tiara and a pink ballerina skirt. She was very fond of the tiara... for 10 minutes until it got in her way. She liked the bouncy castle (until it got scary but then a big, 1 inch taller, 3 year old escorted her out.) T also had her hair sprayed glitter gold (her choice-made her look like a Hollywood blonde), got some glitter brushed on her cheeks (very little), danced the limbo, got a balloon scepter, ate latkes, requested and received a pirate ship temporary tattoo, and, just before we left, scrounged a pirate skull balloon of which she is very fond. 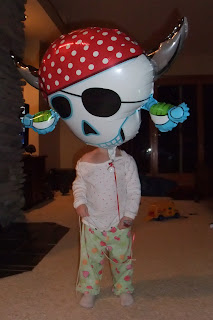 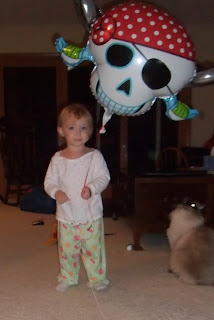 Looks to me like the cat will be claiming dibs on that balloon! LOL

Glad to hear that everyone had a good time!