Last year we were visited by an Eastern Box Turtle. This year Michael has found another. Again, M. Turtle was kept long enough for a photo shoot opportunity and then released to enjoy its life in the area around the house. Upon close examination everyone in the house has concluded that based on the shell markings this is in fact a different turtle than last time. (Now, if one of you knowledgeable people tells me that shell markings change on a yearly basis, then our conclusion is blown, but until then...) We're pretty excited because (and once again, this is a completely un-researched and unsubstantiated conclusion) that this means we have a viable Eastern Box Turtle population in the area.  Whooo hooo we say. 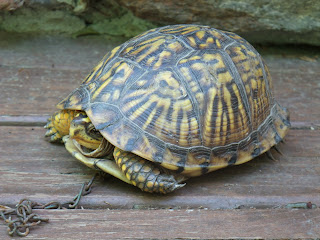 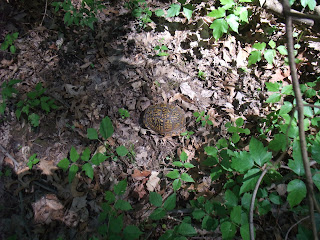 My most favorite summer childhood memories are turtle spotting...it's been so rare in years past and I've missed seeing all the turtles. I'm grateful to see the Easter Box Turtle Repopulation and Conservation Effort fully supported on your palatial estate. - Heather

Did you assess gender of either turtle? They are different in the shape of their undershell.

You are fortunate to have had sightings of two box turtles. They are in decline nation wide. You can practice land stewardship by leaving a brush pile, which makes a great hibernaculum, and planting fruit trees and berry bushes.

@Patricia: we have at least three large brush piles (large=10+ feet in diameter, 4+ feet in height) on the property. We have two pear trees, an apple tree, and some raspberry and blackberry bushes. We *did* have some blueberry bushes, but the local rabbits decided we did not need them as much as they did, so they're gone. Yesterday I saw a small-ish (but adult) northern common snapping turtle on the property, but I'm pretty sure he was just passing through in search of some water in which to wallow. Our yard would be marginal habitat for snapping turtles, and nonviable for snapping turtle hatchlings. But I love seeing the biodiversity around here!