In Chinese culture, a new baby and mother are absolutely, upon pain of public humiliation, under no circumstance to 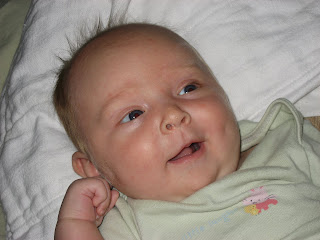 deviate, allowed to leave their house for 30 days after the baby is born. This means that if you have not had a baby yourself, then it is possible for you to have never seen a newborn.

When we took Tovina out during her first week of life and Chinese people saw us, they were quite startled and one 23 year old was so nervous about having such a young baby out of the house that she didn't even want to come closer. Shocking as it may be, there are still plenty of Chinese who are thrilled to see a baby and give us great smiles.

Even last week when we went shopping, one Chinese grandmother came over to us and was incensed that not only was Tovina too small to be outside, I shouldn't be out either. And to top the whole thing off, what were we thinking having Michael carry the baby instead of me, her mother? Michael didn't mind being taken to task too much though since, even though he was carrying Tovina, this nice grandmother yelled at me.
at 6:20 AM

Too funny. Kinda reminds me of when my roommate got yelled at by an old lady on the streets of Manhattan when he was complaining to me that the Post Office was closed because it was Veterans Day. The difference was that he got to respond to her "have some respect for those who served" comment with "I'm a Vet and I want to buy stamps so I can mail this letter." That shut her up pretty quickly. Unfortunately, I can't think of any good comebacks for your situation and I definitely wouldn't know how to translate them.

PS. Tovina is just adorable. I have no idea where she gets it from ;)

Well let's see.. she's adorable, cuddly, and truly believes that the world revolves around her. I think she gets it from the kitties!