In a fit of random energy, Tovina spent time chasing some poor kitties that ran from her in shear terror. Eventually, using their stealth, speed, and 4 strong legs versus T's 2 our pets were able to escape. 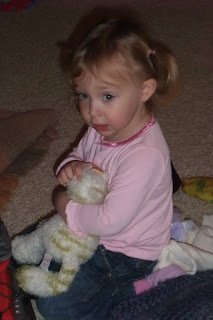 Thwarted, Tovina turned instead to her stuffed kitty and gave it some love and attention. (She may have been trying to show Roxanne and Cyrano that such love was her only intention. The cats did not seem taken in and I must say that I agree with them.)
This was followed by T spending significant time pretending to be a cat - which mostly consists of asking for food. No idea where she got the idea that constantly asking for food is what cats do best.