This evening was much more interesting than any of us expected. Danny and Brendan were coming over to play for a while. But upon arrival, instead of leaping out of the car in their normal style, we instead got a call from the driveway.
Why?
Cause there was this owl hopping around on the lawn and Dan was afraid that getting out of the car might scare it away. As it turned out, the owl could not fly, so while it did waddle away, it did not get far.

Here you might be able to see it crouched down in the middle of the pic trying to pretend its invisible. 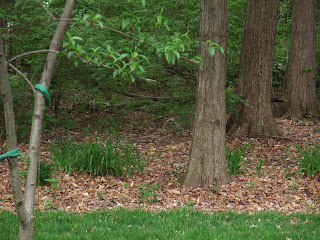 Couldn't quite make it out?
Well then, here's a close up for you. 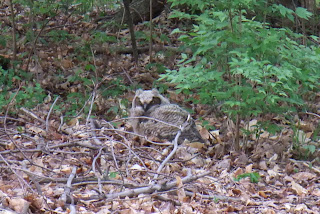 So what does one do with an owl that seems unable to fly? Call RAPTOR, Inc of course! Luckily Sheila found some numbers and kept calling until she found a very helpful lady who asked us a bunch of questions we didn't know the answers to.
Among them:
Q - Does it have feathers or does it look more furry (adult or baby)
A - Feathers. Its an adult
(10 minutes later)
A - Never mind, its all kinds of furry.
After the very nice man from RAPTORS, Inc arrived, we learned that we had a baby Great Horned Owl who was likely under 2 months old.
Here is one of many close-ups of Fritz 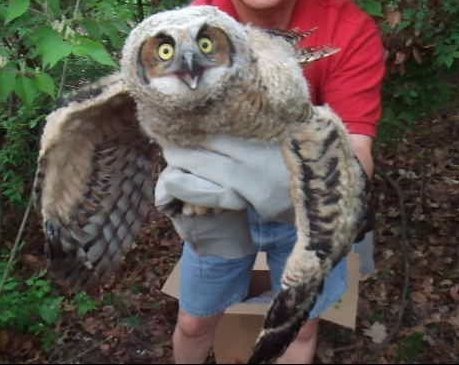 The volunteer checked Fritz out before taking him away and couldn't see anything immediately wrong with him but was going to get him looked at more carefully anyway. After Fritz gets a clean bill of health then he will be brought back to our yard and put back in his nest. With some luck, there will be more pictures.

Duchess (momma) watched the entire proceedings and was not impressed. We could hear her hissing? barking? some sort of clearly aggressive get-away-from-my-baby sound through much of the proceedings. 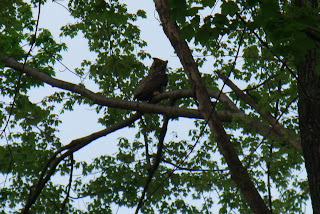 By the way, Duchess was HUGE!

Another shot of Fritz 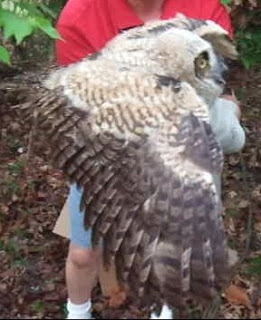 And a picture trying to show Fritz's wingspan.

Things to notice in the video.
The crows that are going non-stop in the background? They had been harassing the owls since 9am. Apparently crows with flock from miles to attack baby owls of this kind. That might have something to do with the adult owls taking over crows' nests rather than building their own. Or it might be related to the fact that these owls eat crows. Whatever the cause, at 7pm the crows were still circling, cawing, and making a general pest of themselves with regard to the owls. It seems likely that if Fritz had not been taken away, he would have been killed by the crows.
The loud clicking noise? That is Fritz clacking his beak and telling us he is very dangerous and we should back away. However, before he was actually picked up, Fritz did everything in his power to back away from us while looking intimidating. He even puffed all his feathers, arched is back, and raised his wings along his back to look bigger. Hard to believe a bird that big is still so young and has lots of growing left to do.

That has got to be one of the coolest things! I never would have thought Fritz was a baby! He looks huge. Kathy T

That is just wicked interesting.
What did our wee one think of the baby bird?

What an exciting encounter! I'm glad Fritz is okay...

One of C's very favorite books is "Owls in the Family" by Farley Mowat, and he is constantly talking about how cool it would be to keep owls as pets. It's not easy to talk him out of that notion!

Thanks for sharing all the pics & video, they will give us something interesting to focus on today... heading up to Poland tomorrow.