Here are some more shots from this weekend.
There was an Easter Egg hunt with the 4 kids (and some adult assistance). 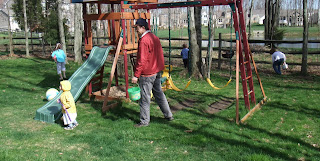 T wasn't quite sure what the whole thing was about though she was more into finding the eggs then the afikomen. Aunt Cindy generously let Tovina get a head start and didn't release the other kids till T had 4 eggs already in her basket. T got her first 4 without much trouble (though she walked by another 4 before she figured out she was suppose to pick them up.) Once she had them though things got a little fuzzy. 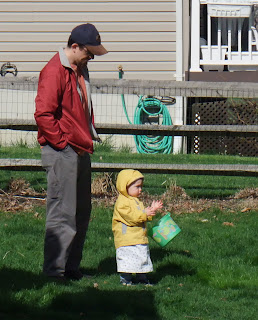 First she tried putting them back where she found them
Then she tried to give them to Emma's cousin who generously gave them back.
Then she put the entire basket in a truck and moved the eggs around that wayuntil she decided the basket was unnecessary and used the truck directly.
Tovina was even more impressed when she learned that there was stuff inside the eggs!

I love the FWG's (foul weather gear). She looks ready to tackle the high seas rather than egg hunts.