Had a couple more shots of the little dog like creature who is now in his new home. 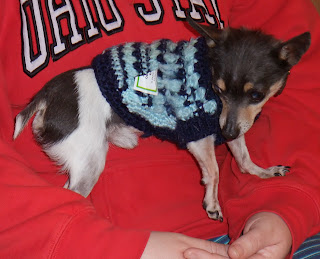 Then Roxanne looking down from the balcony trying to figure out if that new thing was either a) food or b) a toy. Since she out weighed Pip by about 3:1, it was really her choice. (That would be the other reason Sheila held onto Pip- trying to remove that choice.) 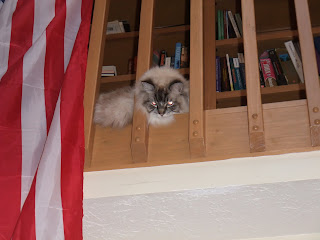 And here are T and Pip almost playing together. What I really think is going on is that Tovina is trying to decide if Pip will fit in the red box the way her other toys do. She likes that red shape shorter because it has a handle that she can carry around and put on her shoulder. It Pip does fit in it then T will have her own personal dog in a purse. 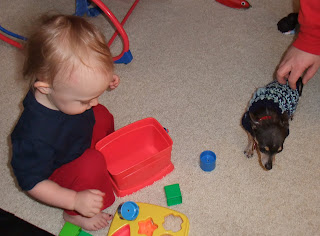 (Just in case you were worried, Pip never had to sit in the red box.)
Update: I just went back and changed Pico's name to Pip. Pip was the dog we brought to Ohio from Texas via gulf shores. Pico was a long hair chihuahua that I had the pleasure of taking care of while in Florida. He was not nearly as adventurous as Pip though also a rescue dog. So sorry for any confusion I may have caused!

Pico was the little ch..saved in Florida for whom Cara sat. He was long haired and very cute.
css