Owls: The day after

Last night's owl escapade was pretty exciting. But it in no way prepared us for this morning.

At around 9:40am Michael heard a rap-tap-tapping, tapping at the door. 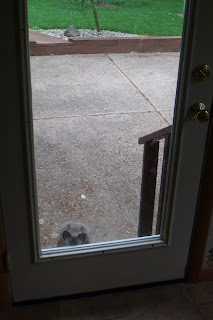 Turns out Fritz has a sibling, Edgar, who wanted to know where we hid Fritz. That's right, there was a baby owl knocking on our front door this morning with his beak. What exactly is the proper etiquette regarding opening your home to a strange baby owl? 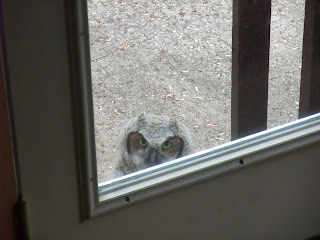 We called the RAPTOR, Inc. folks back to try to get an answer to this perplexing question. They told us that owls at this age are like an inquisitive 2 year old, so there was nothing really strange about his behavior he was just checking out everything in his environment - much like Tovina who really wanted to follow Fritz into the woods last night.
As best we could make out, what Edgar was really thinking was, "Hello. My name is Edgar Montoya. You took my brother. Prepare to die." 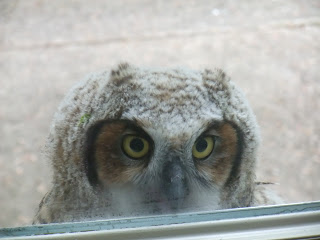 The fog at the bottom of the window is from Edgar breathing.
Edgar seems somewhat smaller than Fritz, though we don't have a side-by-side comparison. Either way, its still shocking that this bird is only about 2 months old. 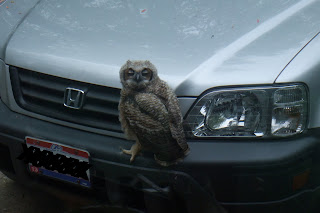 This is Edgar looking all nonchalant on Sheila's car. (The bumper got a little scratched but it doesn't look too serious.)
After we had duly noted what a good brother Edgar was for coming by to check on Fritz, he took off back towards the woods, first stopping at the green electric box in the yard, and then up into a dogwood tree. 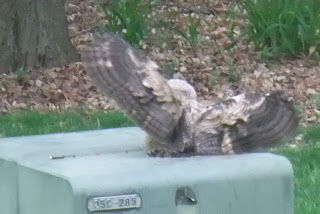 Apparently Edgar can fly - not well - but that's still pretty good, especially since Fritz couldn't get off the ground. 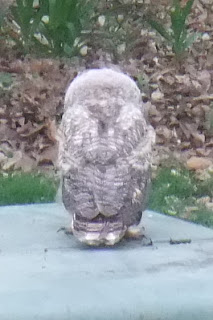 Edgar also has a pretty back which he wanted to make sure we noticed. 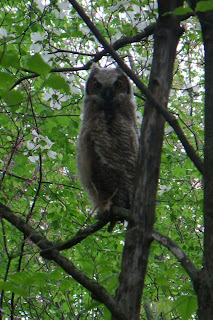 Check back tomorrow for Part 3: The Return of Fritz

Once again, you can see more pictures at Owl
at 9:51 PM

Funny, odd. I do not remember you ever naming your dolls or stuffed animals. Knowing who is Fritz or Edgar is very helpful.
Will the parents come visiting next!
From the video it seems that you got Fritz back tonight. css

That is just unreal!
there has to be a good knock knock joke in there